It seems easy, right? But as I’m writing the novella for Legend of the White Wolf’s 10th Anniversary Edition, White Wolf to the Rescue, I’ve paid a lot of lip service to the fact that the main characters are wolves—he’s an FBI agent, Arctic wolf, she’s a special agent for the FSW, and a gray wolf. Because I’ve written several white wolf stories since Legend of the White Wolf, I can’t write about the characters in Legend finding mates, who have mates in future stories. It’s like going back in time. I had to introduce new characters and show glimpses of the “old” characters to tie them in together.

Now, I also have to show the plot and the possible romance/first meet between hero and heroine. In a novella, you can only have one real main goal since it’s not long enough to have several sub-goals, and you have to limit the number of characters, which I always have trouble with, no matter the length of the story.

What is missing in this story so far? They talk about being shifters, but they don’t shift. It’s hard, because they’ve been tasked to take down the same human bad guys, and running around as wolves doesn’t work. Yet, to make this a paranormal romance, I have to figure out a way to make it happen.

Maybe they meet initially as wolves. I don’t know.

I’ll never forget my lovely daughter mentioning to me that my teen witch wasn’t showing she had powers in the opening of the book. With that one, it was easily remedied. But it was a reminder that if we write about a paranormal character, we need to show that they are paranormal, not just talk about it.

In the opening of a teen witch series I had been watching, the heroine was being burned at the stake. Now, that’s well and good, but my first thought was: is she a witch, or is she being persecuted as a witch? And if she’s a witch, she should be able to use some magic to get herself out of this.

See? As a viewer/reader, my first thought was: is this a paranormal character?

So first and foremost, we have to show a paranormal character using their special gifts.

Yes. The romance. No matter whether they’re paranormal characters or not, if it’s a romance, it should be shown early on. Not that they have to be falling in love, but that there’s some interest. Even if it’s kind of negative. I have a hard time showing a guy who can’t stand the heroine, or vice versa in a story. Some stories show this very well. Others make me scratch my head and wonder why the heroine or hero put up with such an irritating character. It has to be done skillfully for it to work. The classic romance story line is that the characters are at odds for a good deal of the story.

For a paranormal romance, we have an additional element to work with that helps with conflict. Are they accepted in their society? Rejected as deviants? Or keeping their paranormal activities secret? For them, it adds conflict. That’s part of the reason I’m having trouble adding the wolf equation to the novella. It has to be a natural inclusion, not just stuck there to say: Here be wolves. And in a human world, working in human jobs, and taking down human bad guys, it makes it more challenging.

Without a goal in life, we’re lost. The characters feel the same way. So they must have a goal to achieve. That helps with setting up the whole story. In the case of my wolves in White Wolf to the Rescue, both the hero and heroine are after the same criminals. That’s they’re goal—take them into custody and ensure they stand trial. We have forward movement, purpose.

From the beginning, we know this has to be done quickly before… fill in the blank. The wolves kill an innocent person. The kidnapped victim dies. The selection process for the teams participating in the Olympics are made.

We need real change in the characters’ lives to make readers care. He’s a wolf who can no longer shift and is kicked out of the pack. She loses her job and is on the streets. A perfect life won’t cut it. Our characters have to have something that forces them to leave their perfect life and struggle to get to a good place in their lives again.

And now that I’m armed with all these fantastic tips, I need to go back to my novella and add: wolf equation, world turned upside down, ticking time bomb, and I’ve got it nailed! I have the first meet, goal, conflict, and romance! But all are necessary to really pull off a great book.

For a shifter with no interest in she-wolves...he sure is territorial.

Wolf shifter and former Navy SEAL Brock Greystoke isn't interested in she-wolves. The last one in his life ambushed him with the intent to kill. So when he's tasked with helping his cousin's friend get to a wedding, he has no intention of getting involved with her...

She-wolf Natalie Silverton has inadvertently crossed a group of dangerous criminals, and she's in dire need of a bodyguard. Good thing Brock is there to protect her. At every turn, their work—and play—brings them closer to catching the criminals and to each other, but Brock will have to get them out of this alive if he has any hope of winning Natalie's heart.

"Great paranormal romance with depth and dimension."—Night Owl Reviews for A Billionaire Wolf for Christmas

This giveaway is now over. The lucky winner is: Nancy Payette

USA Today bestselling author Terry Spear has written over sixty paranormal romances. In 2008, Heart of the Wolf was named a Publishers Weekly Best Book of the Year. A retired officer of the U.S. Army Reserves, Terry also creates award-winning teddy bears that have found homes all over the world and she is raising two Havanese puppies. She lives in Spring, Texas. Visit her at terrylspear.wordpress.com. 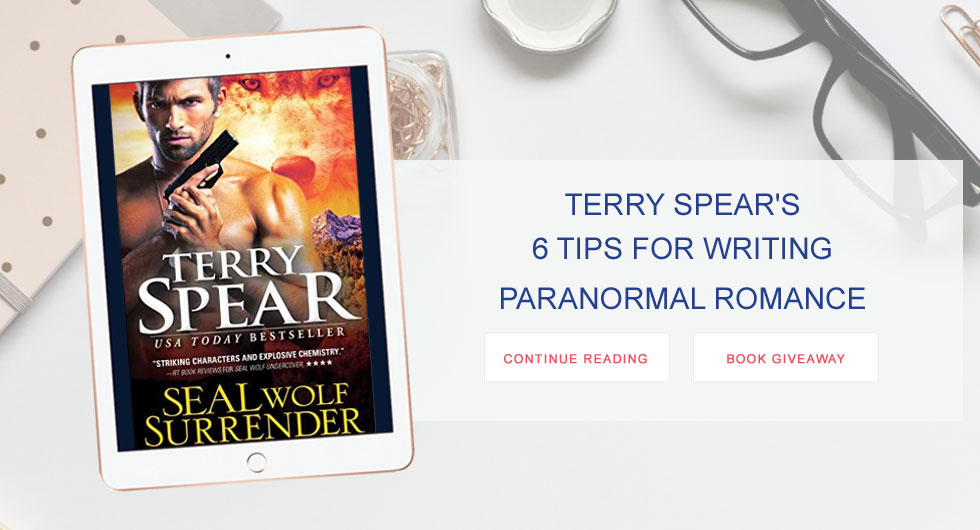