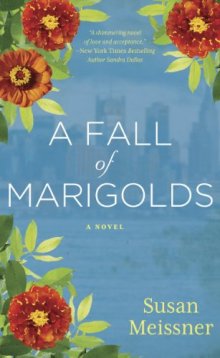 Giveaway: A Fall of Marigolds by Susan Meissner

The start of the blurb for A Fall of Marigolds is just striking...

A Fall of Marigolds

A beautiful scarf, passed down through the generations, connects two women who learn that the weight of the world is made bearable by the love we give away....

September 1911. On Ellis Island in New York Harbor, nurse Clara Wood cannot face returning to Manhattan, where the man she loved fell to his death in the Triangle Shirtwaist Fire. Then, while caring for a fevered immigrant whose own loss mirrors hers, she becomes intrigued by a name embroidered onto the scarf he carries?and finds herself caught in a dilemma that compels her to confront the truth about the assumptions she’s made. Will what she learns devastate her or free her?

September 2011. On Manhattan’s Upper West Side, widow Taryn Michaels has convinced herself that she is living fully, working in a charming specialty fabric store and raising her daughter alone. Then a long-lost photograph appears in a national magazine, and she is forced to relive the terrible day her husband died in the collapse of the World Trade Towers?the same day a stranger reached out and saved her. Will a chance reconnection and a century-old scarf open Taryn’s eyes to the larger forces at work in her life?

I cannot remember a time when I wasn't driven to write. I attribute this passion to a creative God and to parents who love books and more particularly to a dad who majored in English and passed on a passion for writing.

I was born in 1961 in San Diego, California, and am the second of three daughters. I spent my very average childhood in just two houses. I attended Point Loma College in San Diego, majoring in education, but I would have been smarter to major in English with a concentration in writing. The advice I give now to anyone wondering what to major in is follow your heart and choose a career you are passionate about.

I didn't do a lot of writing in the years my husband was on active duty in the Air Force, when we were living overseas, or when we were having children. When my little heirs were finally all in school, though, I became aware of a deep, gnawing desire to write a novel; a desire I managed to ignore for several years.

Finally when I could disregard it no longer, I resigned in 2002 as editor of a small town newspaper, and set out to write my first book, "Why the Sky is Blue." It took four months to write and ten months to be accepted by a publisher. But I was absolutely thrilled to sign with Harvest House Publishers in 2003. I am now working on my sixth novel for Harvest House and it's been a wonderful, thrilling ride.