Night of the Billionaire Wolf by Terry Spear Excerpt

Terry Spear has loads of paranormal romances under her writer belt and today she has an excerpt to share with you. Plus don't miss out on winning a print copy. USA only. 18 and over to enter.

Friendship is fine. Mating for life is a whole other story.” Lexi had never checked into their backgrounds, something she would definitely have done if one of the wolves had really moved her.

“I agree with you there.”

The rain-saturated breeze switched, and Lexi smelled the scent of a male wolf and a black bear that had passed through there recently.

“The wolf has to be a lupus garou like us,” Kate said, “since no one has reported any sightings of wolves in the area. Maybe the wolf was the one who left the message?”

“I don’t believe so.” Lexi didn’t think her father would ask another wolf to get involved in this. The fewer people who knew about it, the better. “And there’s a female black bear, by the smell of her, roaming the area. Keep your eyes peeled and continue to make noise. We need to head on back before the rain starts anyway. We can check the other location later. It will take us about an hour to reach the cabin.”

Kate laughed. “How often does the weatherman get it right?”

Lexi saw a fairy ring of mushrooms and took another picture. “Yeah, I know. But you know me. I always try to give him the benefit of the doubt.”

Light rain began to fall, and then the drops grew bigger. Lexi hurried to put away her camera, and both laughing, they pulled out their ponchos. They were already soaked by the time they got the ponchos on. Still, they’d be protected somewhat from the continuing rainfall.

A couple of young bear cubs cried out somewhere in the distance, and Lexi’s adrenaline surged. “Do you hear that?”

“Yeah, they’re close by. It sounds like danger to me.”

“They’re crying for their mother. They have to be in trouble. I’ll see if the park rangers can rescue them.” Lexi hurried to get her phone out and called the ranger service. “Hi, my friend and I were hiking, and we heard the distress calls of a couple of bear cubs.”

“We’ve got our hands full with a family of hikers who have lost their way, including one who’s badly injured. And a search party is looking for another missing hiker. We can look into the cubs’ situation after we’ve taken care of the hikers in distress.”

“Thanks.” Lexi ended the call.

“You didn’t tell them where the bear cubs are.”

“The park rangers are too busy with human distress calls. You’re my bodyguard. You can protect me.” Lexi left the designated trail, which she wouldn’t normally do as a human because she didn’t want to trample the vegetation. The bear cubs’ cries guiding her, she raced through the forest as best she could, trying not to stumble over tree branches and fall into the ferns filling the understory.

Kate trailed close behind her. “This is a dangerous idea. Where there are cubs, there’s a mother bear nearby. The female bear we smelled, I betcha.”

“Unless something has happened to her. And then we need to rescue them.”

“What do you propose we do? Take them home with you?”

Lexi was sure Kate wasn’t being serious. Wolves raising bear cubs at her oceanside home? No way.

“Once we rescue them, I’ll call the park rangers to pick up the cubs and take care of them if the mother doesn’t come for them. The rangers can find a home for them. As young as the cubs’ cries sounded, they wouldn’t be able to make it on their own.”

Lexi and Kate continued to move quickly through the underbrush in the direction of the cliffs. Lexi’s skin prickled with unease, her stomach twisting in knots. From the sound of the cubs’ cries, they were way down below the cliffs, and the only way to reach them quickly would be climbing down there. That terrified her. Worse, her fearful scent would clue Kate in.

No way had Lexi wanted anyone to know what had happened to make her fear cliffs. She prided herself on keeping her secret. But even now, she suffered a flashback: gasping as a wolf as the soil and rocks at the edge of the cliff gave way, free-falling toward the rocky ground, praying some of the tree branches would help to break her fall. They did, scraping and bruising her, but she still landed badly on the rocks below and broke her left hind leg. Just from the memory, she felt a shock of phantom pain shoot up her left leg. That would be the last time she’d fight with a boyfriend and take off on her own without telling anyone where she’d be.

It had been a stupid thing to do, something she had seen others do in videos on I Shouldn’t Be Alive—in other words, going alone, not telling anyone where she’d be, not having a satellite phone in remote areas, and not having water with her—though as a wolf, that was understandable. She’d sworn she’d never do anything that dumb herself. Worse, she’d been in her wolf form and couldn’t climb to safety with a broken leg, so she’d had to shift into her human naked form before help arrived.

She and Kate finally reached a steep cliff and Lexi hesitated, not wanting to get near the edge that, according to forest ranger reports on the area, were known to crumble. Chills raced down her bare arms and legs. She had to force herself to move toward the cliff’s edge. Slowly, so she wouldn’t end up falling and breaking a leg like she’d done before.

“Are you okay?” Kate asked.

“Yeah, sure. The cliff face is unstable. I’m just being careful.” But it was a lot more than that.

“Okay, yeah, you’re smart to do that. I guess I can’t talk you out of taking this dangerous route and looking for a safer way to get down there instead.”

“I don’t want to risk delaying the rescue.” Lexi finally reached the edge. She observed the rocky cliff, looking for the best way to climb down, terrified she would fall. The mewling cries were coming from the base of the cliff near a couple of trees.

“This is not what I had in mind when I signed up to… Holy shit,” Kate said, peering over the edge of the cliff.

Lexi looked down at the swollen creek rushing along the banks of the cliff. “The creek’s risen because of all the rain. The cubs are crying in a den down below. They could drown. We have to save them.” Lexi started down the cliff, grabbing whatever she could—rocks, tree roots, vines—to keep from falling to her death or breaking a leg or more. She grabbed what looked like a stable rock, but as soon as she tried to hold it and move her right foot to another rock, the one in her left hand pulled free. She fell and cried out, grabbing for anything that could stop her fall. She grasped a tree root and hung on for dear life, her breath coming out in harried puffs.

“Oh God, hang on, Lexi. I really didn’t sign up for this.” Kate waited to descend so she didn’t cause an avalanche of rocks and dirt to collapse on Lexi.

“Are you kidding? Then you’d be able to take all the glory!”

Lexi smiled, then frowned. If the mother bear attacked them, there wouldn’t be much glory in that.

It's not easy being a billionaire, a wolf shifter, and a woman...

Then Lexi meets bodyguard and gray wolf shifter Ryder Gallagher, who's also vacationing at Redwood National Park. When the two run into each other on the hiking trails, and then serendipitously rescue two bear cubs, Lexi feels safe for the first time in she can't remember when. But secrets have a way of surfacing... With the danger around Lexi escalating, Ryder will do whatever it takes to stay by her side...

Comment Question: What's your favorite shifter class and WHY?

This giveaway is over. The lucky winner is: Wendy Wong 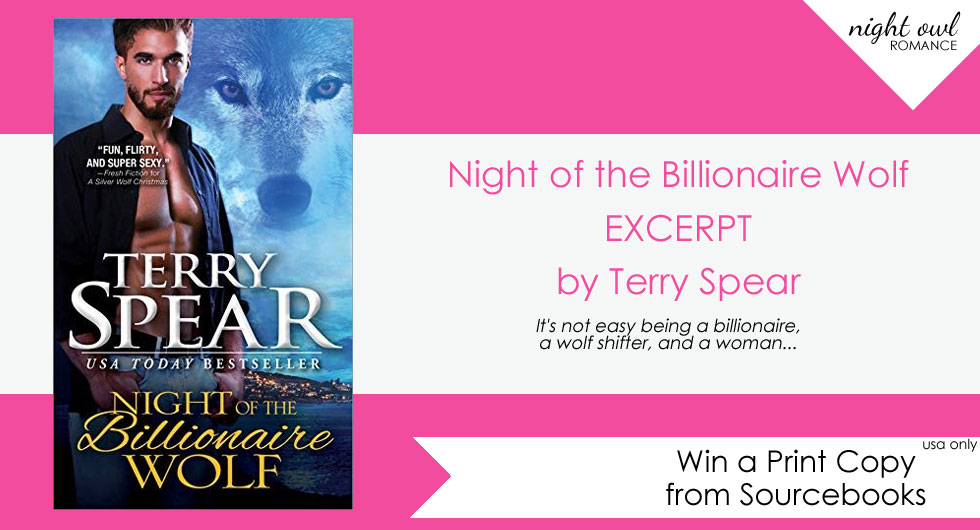