It's that time of year where I start dreaming of Christmas even before Halloween or Thanksgiving. Are you ready to start your Christmas story to be read pile? Today we have Michelle Major here to sharing an excerpt for her Christmas romance. So lets get building your holiday pile

Carrie Reed has always been known as her hometown Good Girl, yet she still loves Magnolia, North Carolina—after all, this is where her newly discovered sisters, Avery and Meredith, live. But Christmas is on its way and with it, her first love. Dylan Scott is back in town and planning on changing everything she’s ever loved about Magnolia with his real estate development project…but not without a fight.

Returning to Magnolia was never in Dylan’s plans—it holds too many reminders that he would never be good enough, and memories of the girl he left behind. But when a tragedy leaves him guardian of a grieving teenager, Dylan returns, ready to remake the town into something only money can buy, small-town traditions be damned. But with Carrie determined to stop him, he finds himself wondering if redeeming his teenage reputation is worth losing out on his second chance at love.

“Do you have some sinister plan to give me a heart attack?” Carrie demanded as Dylan appeared from the darkness. “Or have you just taken up stalking in your spare time?”

“Stalking for sure,” he agreed easily, falling into step beside her.

She gave him her nastiest side-eye. “What are you doing?”

“Unnecessary,” she muttered, even as a thrill passed through her. She’d gotten used to taking care of herself so the idea of Dylan waiting for her in the darkness sent a shiver of pleasure running along her spine. Of course, Avery had just offered her a ride, but this felt different.

Things always had with Dylan, and that was dangerous.

“I want to make fake snow, but the holiday spirit is genuine.” She crossed her arms over her chest when their hands accidentally brushed. “Magnolia is going to become a premier winter destination. We managed it in the fall and if the town has a strong holiday season, we can keep the momentum going into spring and summer...” She blew out a breath, excitement skittering across her skin. “I’m going to turn things around.”

“I’m going to turn things around,” he corrected, and she couldn’t tell if he was teasing or goading her into lashing out at him. “In the meeting it sounded like you’d done your share of online stalking. You know how I run my business.”

“Like you have no soul. You plow forward with no consideration for the history or essence of the community.” “That’s not true,” he protested. “We make things better.”

“Let’s agree to disagree that different isn’t always better,” she said, and they fell into a silence that should have been awkward but felt almost companionable.

“You’re taking this whole holiday festival thing really seriously,” he told her as they reached the corner of the block where she would turn off for her house.

Carrie couldn’t help grinning at him. “Yeah, I am. It’s going to be the best ever.”

Dylan smiled. “Who are you and what have you done with the shy girl I used to know?”

“A lot has changed since you left.”

He leaned closer, just an inch, but her body went on high alert. “Including you.”

If only she’d outgrown her reaction to this man. She didn’t want this, the tightening in her belly and the way her breath caught as his gaze fell to her lips. Especially not if they were going to work together. The last thing she needed was to let down her guard with Dylan.

It would be like inviting the big, bad wolf to tea.

“I have a boyfriend,” she blurted.

“It’s kind of new,” she continued, ignoring the fact that in this case new was another word for nonexistent. “I don’t even know why I’m telling you this...”

One thick brow rose. “Because you were looking at me like you wanted me to kiss you.”

She sniffed and took a step back. “I was not. Maybe you’re confused because you were staring at my mouth like you were going to maul it.”

“Maul?” He rolled his eyes. “Your memory must be going bad because I don’t maul women. I have it on good authority that I’m a damn fine kisser.”

Her limbs went heavy as she thought about the blissful hours she’d spent kissing Dylan. Damn fine didn’t begin to cover his skill in that area. But she had no intention of admitting that to him.

“Average,” she said with a shrug.

His mouth dropped open. “In your dreams.”

“I have vivid dreams. You couldn’t possibly compete.”

His pupils darkened and she wondered what the heck she was thinking goading him on in this way. It was like waving a red flag in front of an irritated bull.

Suddenly, he stepped in front of her, turning to face her so quickly that she almost ran into him. “I’d bet my last dollar that I can outperform your wildest dreams. And we’d both enjoy every moment of it.”

He stepped even closer and she resisted the urge to back up. Stand her ground. That was the only choice with Dylan. “We’ll never know because you chose a check over me.”

The words spilled from her mouth before she could stop them, but she regretted it almost immediately. She didn’t want Dylan to think she still cared about how he’d broken her heart. No way. Not ever.

His gaze hardened and he moved away from her. “We never would have lasted anyway,” he said and as much as she wanted to argue, she nodded.

“And you have a boyfriend.”

“Who’s a better kisser than me?”

Dylan studied her for a long moment, his mouth curving into an almost-smile that did funny things to her insides. “Will he be helping with your little winter carnival plan, too?” His big shoulders rolled as if adjusting the tension they held.

“It’s not little,” she argued automatically. “And he lives in Charleston.”

“A long-distance love affair? How long have the two of you been dating?”

Carrie narrowed her eyes because it felt like Dylan was asking questions even though he didn’t believe a word she said to him. “Six months,” she told him. “He’s very kind. And refined. Gentle. A true gentleman.”

“Stop.” She held up a hand and pushed her palm against his chest.

Big mistake. The instant she felt the hard muscles of his body and the heat coming from him, need pooled low in her belly. She drew back her hand and glanced up to find him staring down at her again, nostrils flared and color high on his cheeks.

“I have to go,” she murmured, desperately searching for control. Purchase over her desire. A cold shower. Anything to stem the tide of yearning she felt for this man. “And call Randall.”

His lips quirked. “Tell him I said hi.”

“Su-sure,” she stammered. “I’ll talk to Malcolm, too. He couldn’t have been serious about us working together.”

“Your mayor seems like he’s always serious when it comes to this town.”

Yeah. “We’ll figure it out anyway,” she insisted. “You can’t want to work with me any more than I do with you.”

She expected an immediate agreement, but Dylan only quirked a brow. “Sweet dreams, Carrie,” he said, his voice thick and rich like warm honey. “You be sure not to think of me while you’re asleep. But if you do, know that real life would be even better.”

She bit down on the inside of her cheek to suppress a groan. “Never,” she told him and stomped past, knowing her dreams would be nothing but that irritating man.

About the Author: Michelle Major is the best selling, RITA award winning author of over twenty sexy and sweet contemporary romances. She loves second-chances love stories, smart heroines and strong heroes. A midwesterner at heart, she's made the Rocky Mountains her home for over twenty five years and is thrilled to share her books with readers. Connect with her at www.michellemajor.com or on Facebook and Twitter (@michelle_major1).

This giveaway is now over. The lucky winner of the print copy is: VIRGINIA CAMPBELL 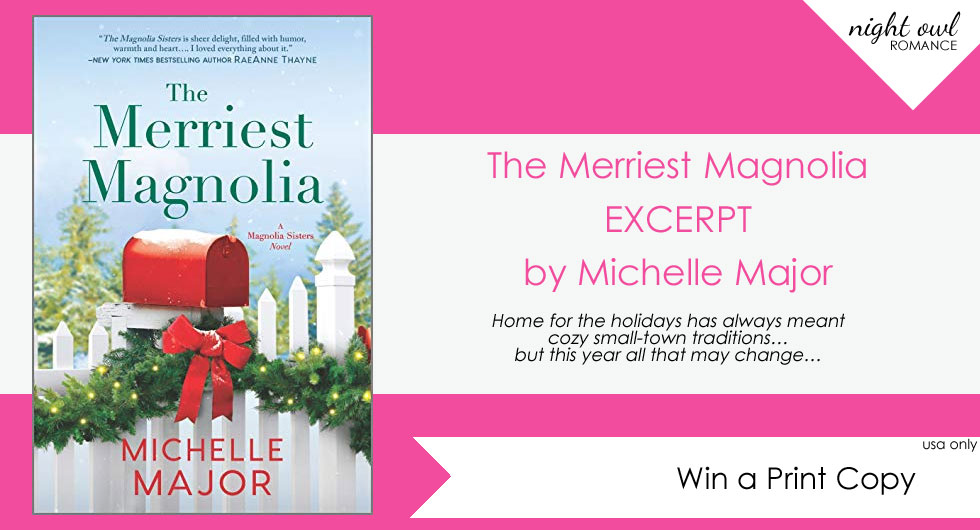