Wolf Instinct is the ninth book in our SWAT: Special Wolf Alpha Team Series. The series is about a huge pack of alpha werewolves hiding in plain sight as the Dallas PD SWAT team, protecting the citizens of their great city and hoping no one figures out their secret, all while looking for that one special person in the world who can accept them for who they are.

With the tenth book in the series releasing November 2019, and books eleven and twelve in draft, SWAT is definitely a long-running series. The funny thing is, while we obviously started the process with the intention of letting every member of the Dallas Pack get their own story, we had no concrete idea how we were going to get there. Sure, we had a general idea of the heroine that each guy would end up with and maybe a thought or two on how they might run into each other. But as far as a detailed outline of what was going to happen in every book, who the bad guys were going to be and what kinds of adventures the SWAT Pack would get into? Nope, that level of detail didn’t exist.

There are a couple reasons for that. The most obvious one is that New York usually only contracts three books at a time. It doesn’t make a lot of sense to expend a huge amount of energy plotting out books that are years down the road.

But the biggest reason we refrained from over planning the series is simply freedom. Knowing it could easily take a decade to put out all the books in the series, we decided we didn’t want to pin ourselves down. We knew if we let ourselves get locked into a set formula and template for the stories, they’d quickly get stale.

So, we established a limited set of rules as far as what would happen in each story. Like how the heroes would act and how the heroines would be strong but still accepting of a man’s help. We also knew we wanted the romantic and dramatic elements would blend together seamlessly, as well as what the HEAs would look like. Other than that, everything was on the table. We didn’t want the reader to know what was coming next because to a certain degree, we didn’t know what was coming next.

As the series progressed, we developed the werewolf mythology in a drastically different direction than you see in other shifter books. No saliva-filled werewolf bite creating more werewolves in this series. Uh-uh. And it isn’t a stretch to say that what constitutes an alpha, beta, and omega werewolf in SWAT bears little resemblance to what readers have probably seen in other books. And yeah, there are female alpha werewolves in this world. Oh, and when they find The One they’re meant to be with, the fangs and claws come out…in a good way.

The bad guys and suspense elements are constantly changing as well. In the beginning of the series, there are local crime lords, gang leaders, and corrupt politicians. But soon enough, the threats get bigger and are more aware of the werewolves they face, and the Pack must grow stronger and tighter to deal with them.

In Wolf Instinct, we take the threat against the Pack in a drastically different direction, as the werewolves of SWAT discover they’re not the only thing that goes bump in the night. At the same time, our heroes discover that maybe there are mates out there for them in places they never expected to look.

So, to answer the question of how you keep things fresh in a long-running series, the answer is simple. Be willing to break the rules and don’t be afraid to walk the high wire without a net.

How can she be The One for him?

SWAT werewolf Zane Kendrick will do whatever it takes to take down the man who attacked his pack. His search takes him to Los Angeles, but when he meets Alyssa, the smart, sexy agent who comes to his aid, he's immediately interested in pursuing more than just the next lead. All his wolf instincts tell him that she's The One.

FBI agent Alyssa Carson has investigated some weird stuff lately, and finding missing people drained of their blood definitely falls into that category. When following a clue leads her to Zane, she agrees to work with him and his team. She's attracted to the gorgeous Brit, but she doesn't have time for anything but finding answers.

When Zane and Alyssa discover the sinister truth, it'll take everything they have to make it out of this mission with their lives—and hearts—intact.

This giveaway is now over. The lucky winner is: Latifa Morrisette

Paige Tyler is a New York Times and USA Today Bestselling Author of sexy, romantic suspense and paranormal romance. She and her very own military hero (also known as her husband) live on the beautiful Florida coast with their adorable fur baby (also known as their dog). Paige graduated with a degree in education, but decided to pursue her passion and write books about hunky alpha males and the kick-butt heroines who fall in love with them.

She is published with Sourcebooks.

She is represented by Bob Mecoy. 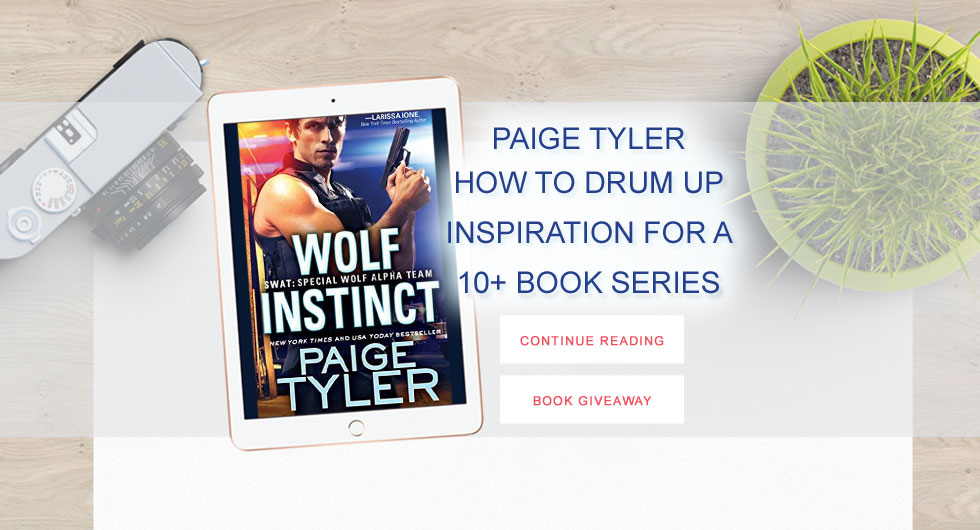