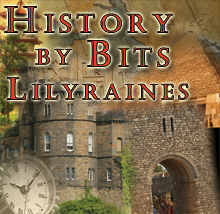 As always, January brings in the new year and, if the person so chooses, a new beginning. For some - whether in the past, near past, or the present - a new beginning involves moving to a new land or maybe exploring an, as yet, unexplored region or even outer space. In keeping with new beginnings, here are a few books to consider.

Although finding a description for the book is difficult, the book may possibly be self-explanatory by way of the title in that it chronicles the early English colonialism on what would become US shores. The book is part of project Gutenberg (providing free downloads) as well as available free as an Amazon.com Kindle edition.

The book's viewpoint is Juliet Wells Brier's and how her and her family (husband and three sons) traveled from Salt Lake City to Los Angeles during the Gold Rush days. From the description provided, the theme presented is about the journey and the trials that emigrants heading west faced - perils, in this instance, made more perilous by traveling through Death Valley.

A Pioneer in Yokohama: A Dutchman's Adventures in the New Treaty Port by C.T. Assendelft de Coningh and Martha Chaiklin (editor)

A Pioneer in Yokohama is a first person account of a Dutch merchant in the Japanese treaty ports of the 1850s. It provides a certain, unique perspective of the kind of economic, military, and political factors that Western Nations (mostly imperial) brought to, what was then, a newly opened Japan. The book provides a historical and cultural background in the introduction; a biography of De Coningh; and footnotes explaining terms, names, and cultural references that may be unfamiliar to the reader. Also included are illustrations, a chronology of events, a bibliography and index.

Interspersed with a wide array of nineteenth- and twentieth-century photographs, the book traces the island's history from it's days as an oyster island before becoming a station for immigrants through the years it served as the East Coast's flagship station of the U.S. Bureau of Immigration through "today" as the National Park Service's largest museum.

The description provided for the book mentions that this represents "the best of Tyson's commentary" and that it includes a candid introductory essay on NASA and partisan politics and that it provides an eye-opening manifesto on how space exploration is important for America's economy, security, and morale. While I have not read this book as of yet, I am familiar with Mr. Tyson's commentary on various programs and would recommend any works by him due to the way he presents his information - it is put forth in such a way as to make it understandable for everyone without coming across as condescending.