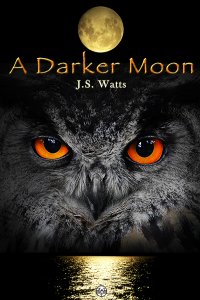 Enter to win an eBook copy of A Darker Moon!

I must admit, it seems as if I have written a number of not dissimilar pieces on the influence of myth and legend in my fiction. I guess that’s because myths, legends, fairy tales and their ilk have always attracted me and my fascination with them never grows stale. Moreover, fantasy and myth are such complex subjects that, despite some basic similarities, each article ends up approaching the subject from a different angle.

To begin with, there is me and my lifelong engagement with the mythic and fantastical. As a very small child I loved the stories my mother made up. They were a mixture of genuine history (at a young age, I was already entranced by the gory deeds of the past) and lighter, more childish tales of fairy Mustard Seed and her chums. When my father sang to me I always wanted more of “The Mermaid With The Rusty Tail” – a song he made up to entertain me and then regretted because, having wanted more, I always wanted more again. (Her tail grew rusty because she sat with it in a bucket of water for too long – in case you’re interested.)

Once I was old enough to read stories for myself, I compulsively worked my way through the “Myths and Legends of the World” series in the children’s section of our local public library. Then I discovered Tolkien’s “The Hobbit” and C.S. Lewis’s “The Chronicles of Narnia” and didn’t look back. As an adult, my reading habits continue to embrace both literary and genre fantasy.

It is hardly surprising, therefore, that myths and fairy stories, and all the mysterious fantasy-type things that flutter in-between, feature with some regularity in all forms of my writing: poetry, fiction and non-fiction.

Many of my individual poems carry shadows of myths and legends at their core; likewise, my short stories. When I put together the manuscript for my first poetry book, it seemed a very natural thing to base it around my fascination with folk-tale and fantasy and create “Cats and Other Myths” - a collection that finds contemporary relevance in the echoes of myth and legend and the mythic in the day to day world around us.

Similarly, when writing my first novel, it was probably inevitable that my contemporary tale of a man’s obsession with the unknown mother who abandoned him as an infant took on dark, mythic tones. The psychological narrative at the heart of the story melded with legends from the Judaic Apocrypha, Celtic mythology, stories from ancient Greece and a handful of related tales to form the dark psychological fantasy of “A Darker Moon”. The title of the book relates to the discredited astronomical hypothesis that the earth has a second moon, named Lilith by astrologer Walter Gornold.

The main focus of the book is the story of anti-hero Abe Finchley, who is struggling to come to terms with his own existential darkness, a strangely ragged memory and a revealed dark and violent family history that spans generations into humanity’s deepest past. When I identify other key characters in the book as called Cain and Eve, I am sure you will guess one of the sources for the novel.

I am now faced with something of a problem. If I list all the myths and legends referenced within “A Darker Moon” in too much detail, I risk highlighting a number of key plot developments. You are, presumably reading this piece to find out about those self-same stories, yet I don’t want to give away too many spoilers. What’s to do?

For the purposes of this article, I am going to provide you with a fleeting résumé of the legends and folk tales that echo within “A Darker Moon”. Think of it as a tantalising taste of a larger banquet yet to come.

Walter Gornold’s claim that there is a second, darker moon orbiting the Earth has already been touched upon within this post. The astronomy has been debunked, but the concept of the dark moon and its link to Lilith, goddess, demon and apocryphal first wife of Adam, remains prevalent in astrology. The myths of Lilith and her spawn resonate throughout “A Darker Moon”, along with images of owls, trees and serpents, all symbols linked to the Lilith legend.

Laid out alongside tales from the Judaic tradition, you will also find references to an archetypal Greek tragedy, the predictive powers of The Tarot, eastern beliefs in reincarnation and the Celtic feminine trio of maiden, mother and crone, as well as other tri-partite divinities.

Not all ancient tales feature straightforwardly in the book. A number have been twisted, developed or inverted. Some people shun having their photograph taken because they believe that capturing their image captures a part of their soul. What if matters are reversed? What if the person capturing an image in a camera, words, or paint, gives up a part of their identity?

“A Darker Moon” is a smorgasbord of myth. Trying to hold all of it together is the memory of one damaged man, Abe Finchley. The question is, can Abe’s mind accommodate and survive the psychic and psychological tensions of so many mythic influences?

I like to think that the fantasies we create mirror elements of ourselves back at us. The mirror of “A Darker Moon” is a black one. Sometimes the blackness lies in what we remember, sometimes in what we cannot help but forget. Hopefully, no one has issues as dark or as complex as Abe’s, but few of us is totally without shadow. The old myths and legends that “A Darker Moon” draws on, as well as its freshly created fantasy, illuminate Abe’s story, but maybe reflect a little bit of light back on us. Perhaps I should point out, by way of gentle warning, that the tag-line to the book is: “A mythical tale of light and shadow and the unlit places where it is best not to shine even the dimmest light.” 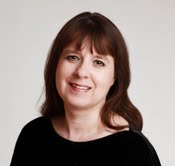 J.S.Watts is a British writer. She was born in London, England and now lives and writes near Cambridge in East Anglia. In between, she read English at Somerville College, Oxford and spent many years working in the British education sector. She remains committed to the ideals of further and higher education despite governments of assorted political persuasions trying to demolish them.

Her poetry, short stories and book reviews appear in a variety of publications in Britain, Canada, Australia and the States including Acumen, Envoi, Mslexia and Fantastique Unfettered and have been broadcast on BBC and independent Radio. She has been Poetry Reviews Editor for Open Wide Literary Magazine and, until its demise, Poetry Editor for Ethereal Tales. Her debut poetry collection, Cats and Other Myths and a subsequent poetry pamphlet, Songs of Steelyard Sue are published by Lapwing Publications. Her novel, A Darker Moon, is published by Vagabondage Press Further details of her books can be found on her website: www.jswatts.co.uk. You can also find her on Facebook at www.facebook.com/J.S.Watts.page